a man who could predict the future?

Richard Pottyer’s claim to fame is his ability to predict the future in Thomas More’s unfinished The History of King Richard III.  The main problem with this work is that nobody can be sure today what is actually true and what is not.

Sir Thomas was not the first, nor the last, to tell a few “fake news”.  He cleverly did this by mixing real events and persons with made-up bits.  Unfortunately, this often leads to the whole story to be accepted as fact, while a bit more care is necessary.

The very first line of More’s History sets the tone: “King Edward, of that name the Fourth, after that he had lived fifty-three years, seven months, and six days … died at Westminster the ninth day of April, the year of our redemption 1483”.[i]  Edward IV did indeed die at Westminster on the given date. However, the rest is fiction as he was only 40 years and 11 months old (born on 28 April 1442).  Why More changed Edward’s age so significantly is not clear.

The History of King Richard III can hardly be considered fan-fiction.  Richard gets accused of many crimes and the work has helped to blacken the king’s name over the centuries.  More wrote it c.1513-1518, borrowing from Polydore Vergil and John Rous.[ii]

Richard Pottyer features only in the one significant scene of More’s book, and, unfortunately for him, that is all he is remembered for in most works about the period.

Howbeit, this I have by credible information learnt, that the self night in which King Edward died, one Mistlebrook, long before morning, came in great haste to the house of one Potter, dwelling in Redcross Street without Cripplegate, and when he was with hasty rapping quickly let in, he showed to Potter that King Edward was departed. ‘By my troth man,’ quod Potter, ‘then will my master the Duke of Gloucester be king.’[iii]

Let’s first look at what we know to be true.  The setting, Red Cross Street, and the mentioned persons did indeed exist.

Red Cross Street was “In Cripplegate Ward Without”[iv].  As an old map shows[v] it was just to the north of St Giles’ church without Cripplegate, in an area that is now covered by the Barbican Centre. The “without” – as well as “within” – refers to the old London Wall, of which the Cripplegate was one of the gates.

The church of St Giles Cripplegate was just outside the wall.  This is the parish where the action takes place.  Going back to a Saxon church, it had been rebuilt in the Perpendicular Gothic style in 1394.  The tower was remodelled in 1629 but is now basically back to its 14th century design. The present church should be fairly close to what it would have been like in the 15th century, although it was severely damaged by fire three times, in 1545, 1897 and 1940.  After the last fire during WWII, it was rebuilt based on restoration plans drawn up after the first fire.[vi]

The source of this “credible information” was Thomas’s father, John More, as is revealed in the Latin version of the History. [vii]   Thomas More was only 5 years old when these events unfolded.  Mr More snr was a lawyer, though not spectacularly successful in his career.  He was never retained by the crown and only became a justice of the common pleas in 1518, at the age of 67.  He lived in Milk Street (in “Cripplegate Ward Within”[viii]).  He was still alive, when his son penned his History.  He died in 1530, at the age of 79, and is buried in St Lawrence Jewry.

Sir John seems to have had fond memories of Edward IV, who had granted him permission to bear a coat of arms.  He provided for prayers for Edward’s soul in his will.  Edward IV also gets a good press in Thomas’s story, which might, however, also have to do with the fact that he was the grandfather of his contemporary king, Henry VIII.  It is possible though that John More did not transfer his sympathies to Edward’s brother, Richard III.[ix]

The man, who brought the message, William Mistlebrook, was a royal auditor, who had worked for Edward IV in South Wales.  He continued as auditor under Richard III.[x]  In April 1484, he was appointed as auditor of the Duchy of Lancaster lands in Wales and the south of England.  He also audited the estates of Anthony Woodville, Earl Rivers, and acted as joint auditor of the lands held by the crown during the minority of George of Clarence’s son Edward, Earl of Warwick (which lasted until 1496[xi]).  He continued in Henry VII’s service and died in 1492, while travelling on official business at Denbigh in northern Wales.[xii] The pardon he received early in Henry VII’s reign states that he lived the parish of St Giles Cripplegate – the same parish as Red Cross Street.

The main character of the anecdote is Richard Pottyer.  When he was king, Richard III made him attorney of the Duchy of Lancaster in Chancery.  However, it is likely that he was in the service of Richard before the events in 1483, because they are mentioned together in an entry in the Calendar of Close Rolls – Edward IV.  According to this entry, on 4 Nov. 1482 a Sir Thomas Greenfield gifted “his goods and chattels in Romsey and Odiham, Hampshire, and elsewhere, to Richard [of Gloucester], Thomas Lynom and Richard Portyer.[xiii]  The gift/sale was probably due to financial problems, which Thomas Greenfield experienced again and again over a long period. Greenfield had been in Richard of Gloucester’s service since at least 1474 and had victualled Richard’s ship the “Anne” of Fowey for the Scotland campaign in 1480.[xiv]  He was indicted in the Buckingham Rebellion, but seems to have avoided attainder by submitting.[xv]  He continued into the service of Henry VII.[xvi]

As already mentioned, Pottyer was made attorney of the Duchy of Lancaster by Richard III.  Pollard suggests that he “may perhaps be identified with the Richard Potyer who was one of the commissioners appointed on 13 November 1483 to arrest and imprison all rebels in the counties of Somerset and Dorset.”[xvii]

Along with Pottyer and Richard of Gloucester, the third beneficiary of the Greenfield gift is Thomas Lynom.  This indicates that Pottyer – at least from 1482 – belonged to a close-knit circle of men, who had been in the administration of Richard as duke of Gloucester and continued to serve him once he was king.  In this group were, among others, Thomas Lynom (Richard III’s Solicitor General)[xviii], Thomas Barowe (Richard III’s Master of the Rolls), Morgan Kidwelly (another lawyer) and Robert Brackenbury.   We don’t know when Pottyer entered Richard’s service, but Barowe and Kidwelly had been there at least since the early 1470s, Brackenbury probably since 1477 and Lynom since 1480.[xix]

There was a strong connection between these men. An example is a document from 1 July 1484 concerning the transfer of the manor of Mawedelyne, Herts, from John and Joan Forster and Thomas and Edith Holbache to Robert Brackenbury, Thomas Barowe, and Morgan Kidwelly.[xx]  This property was probably Maudeleyns in Northchurch near Berkhamsted.

The close relationship between these men continued after the regime change of 1485.  With the obvious exception of Robert Brackenbury, who had died with his master at Bosworth, they continue to be mentioned in documents together after 1485:

It is not known when Richard Pottyer died, but he seems to have survived Barowe at least for a couple of years, as a “Richard Potyer” is mentioned in a document of 1501, which might refer to him[xxiv].

Mistlebrook and Pottyer probably knew each other.  They did not live far from each other and both were colleagues at Westminster.  It is thus plausible that Mistlebrook would have gone to share the momentous news of Edward IV’s death with Pottyer.

As far as the setting and the characters of More’s account are concerned, it is factual.  However, the actual conversation might be more fiction than fact.

The question is whether Thomas More’s source of his “credible information” is actually credible?  It is not known whether John More knew either Pottyer or Mistlebrook.  If he did not, he could not have any firsthand knowledge of any comments Pottyer made.

Even if he did know them, Mr More snr would not have been able to overhear the conversation.  According to his son’s account it took place in the middle of the night, when John was probably fast asleep in his own bed in Milk Street.  Milk Street is too far away from the location of Red Cross Street for him to have heard a commotion next door and to have gone to see what it was all about.  In any case, Thomas More tells us that the conversation took place after Mistlebrook had been “let in”, ie. indoors, probably behind closed doors .  At best, John remembered hearsay.  The problem with hearsay is that the actual words might have been blown out of all proportion. 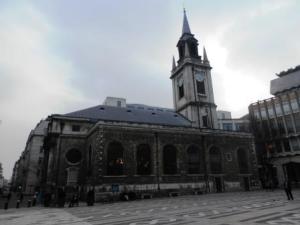 Thomas only wrote his story of Richard III approx. 30 years after the events he describes took place.  Even had the hearsay been correct, it is not certain that his father would have remembered accurately what had been said all that time ago.  Not to forget that hindsight might have coloured his recollections.

And last but not least, we cannot be sure that Thomas quoted his father accurately, or even intended to do so.  He was following his own agenda in writing the story, and his aim was most certainly not to depict Richard III as a good and honourable king.  Thomas More’s intention of telling this episode was to illustrate that Richard planned all along to take the crown from his nephew.  Shortly before recounting the incident of Pottyer’s astonishing statement, Thomas tells his readers “that he [Richard of Gloucester] in King Edward’s life forethought to be king, in case that the King his brother … should happen to decease … while his children were young”.[xxv]  In support of this accusation he tells us the anecdote about Pottyer, which should make us question the credibility of this information.

Maybe aging Edward IV by 13 years fulfilled the same purpose?  The older the king, the more likely he would be to die while his children were still young.  To accuse Richard of waiting impatiently for the early death of his 40-year-old brother is less convincing than when the brother is quite a bit older.

There are many question marks over the events as they are represented in The History of King Richard III.  Therefore, rather than the unsubstantiated words put in his mouth by Thomas More, Richard Pottyer should be remembered for his role as an administrator and a loyal friend.

One thought on “Richard Pottyer”