‘The Greats’ covers a wide range of works, dating from 1485 to 1904, which are arranged chronologically.  It is not a huge exhibition, only 74 works in total, 41 paintings and the rest are drawings, but it feels much larger.  Limiting the number of pictures allowed the works to be displayed to best effect.  It also helped to prevent the exhibition from feeling too crowded.  Although there was quite a large number of visitors, all pictures could be studied in detail, without other people getting into your view all the time.

There were many beautiful and interesting pictures, but let me tell you about those which for me were the highlights.  This is a completely subjective choice. 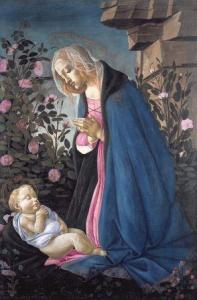 One of the first paintings we saw was The Virgin adoring the sleeping Christ Child by Sandro Botticelli from c. 1485.  It was a great help that the information panels explained some of the symbolism in the paintings, which allowed the viewer to get a much more in-depth impression of the works.   For example, we learnt that the hedges of pink roses which form an enclosed garden are a symbol of the immaculate conception.  And the roses are thornless to show that Mary was free of original sin. This painting is from a period in which I am particularly interested, so I was able to see it in its historical context.

Another favourite was Diego Velázquez’ An old woman cooking eggs (1618).  Velázquez was only 18 or 19 years old when he painted this picture.  Maybe the painting appealed to me because of its “distinct Spanish character”.[i]  The woman and the boy we see in this picture also appear in other paintings by the artist and might have been family members or neighbours.  Apparently the kitchen utensils also appear in other pictures.  However, as the same type of utensils are sold on Spanish markets to this day, they probably could be found in many homes.

I enjoyed the Portrait of Pieter (?) Verdonck by Frans Hals (c. 1627), because of its background story.  The picture shows an elderly man with a big jawbone in his hand, which is certainly not something you usually see in portraits.  Apparently at some stage in the painting’s history, a goblet had been painted over the jawbone and the sitter’s wild hair had been covered with a beret.  However, when it was discovered that these were later additions, they were removed.  Which is just as well, as the jawbone is an essential part.  Verdonck was well-known for being outspoken and had been in trouble for harassment.  The jawbone is the same weapon Samson uses in the Bible to kill the Philistines (Judges 15: 14-15), here it reflects Verdonck’s ability to wound with words. 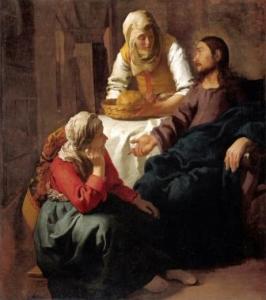 Vermeer, Christ in the House of Martha and Mary

Johannes Vermeer’s Christ in the house of Martha and Mary (c. 1654-55) depicts one of the Bible stories which has always resonated with me (Luke 10: 38-42). Jesus and his disciples visit his friends Martha and Mary.  While Martha gets on with preparing food to make their guests feel welcome, her sister just sits around listening to what Jesus has to say.  Martha is getting more and more annoyed (you can imagine cupboard doors banging in the kitchen!), until she goes to Jesus to complain about her sister’s domestic laziness. To her surprise, Jesus explains that Mary’s eagerness to listen is at this time more valuable than Martha’s providing material comfort.  Here we see the three around a table. In the front is Mary sitting on a low footstool. Jesus sits in a comfortable armchair at the side of the table, talking to Martha while pointing at Mary.  Martha, with pushed up sleeves, stands behind the table placing a basket with bread on the table and looks at Jesus.  For me the picture reflects all the essential details of the story.

On a hot Sydney summer’s day, Reverend Robert Walker skating on Duddingston Loch by Sir Henry Raeburn (c. 1795) was a refreshing choice.  It is a striking picture.  The skater is in the centre and clearly depicted against an indistinct background of ice, mountains and sky.  To judge by the articles for sale in the exhibition shop, this must have been one of the favourite exhibits.

The front of the catalogue features the glamourous portrait of Lady Agnew of Lochnaw by John Singer Sargent (1892).  It gives off a sense of elegance and opulence.  Lady Agnew looks very calm and relaxed in the painting, while in reality she was recovering from nervous exhaustion.

So far my personal favourites, but this is not an exhaustive list and due to its wide scope, there should be something for everyone.  The exhibition is definitely worth the trip and can only be highly recommended.

[i] The Greats:  Masterpieces from the National Galleries of Scotland.  Art Gallery of NSW, Sydney, 2015, p.50

All the above illustrations are obtained via Wikimedia Commons.