Often when you least expect it, you discover something special.  This is also what happened during our recent holiday in Tasmania.  One day, we drove from Hobart north east to Swansea, with some stops along the way.

Our first stop was in Buckland, where we spotted the Church of St John the Baptist. The door was not locked, so we could have a look inside.  We were amazed by the glorious stained glass windows, which were unexpected for a church in a small village.  Trying to find out more about this church, lead me to a fascinating tale, of a church with many architectural features and a fair amount of intrigue around it.  You could make a movie out of it. 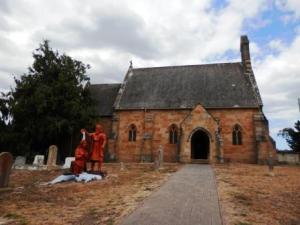 The church is considered to be one of the first ecclesiologically correct churches in Australia.  I have to admit, when I first read the phrase, I didn’t have a clue what it meant. Maybe it’s the same for some of my readers.  Therefore I would like to start with some background on ecclesiology.

In the 1820s the Anglican church felt under pressure, on the one hand by nonconformists, on the other by Catholic Emancipation, but above all by the state.  Several High Church academics and clerics from Oxford suggested that a return to the church’s historical roots would be the only way to save the Established Church.  A return to earlier forms of worship was seen as a way to revitalise the church.  In this context “modern” was a negative term, while the medieval past was desirable.  The group started publishing their thoughts in penny tracts in 1833.[i]

Their ideas were of interest to a group of Cambridge undergraduates, though they were more concerned about the way services were conducted and the way churches were designed.  They criticised the typical Georgian style of their time, particularly the enclosed pews, the altar hidden away at the back, with parishioners even sitting on it if they didn’t have a seat.[ii]  Communion was only rarely celebrated. The services were nearly entirely conducted from the pulpit, and the chancels were no longer used.  Once Queen Victoria came to the throne, many thought that the time was right for a change.  In the spring of 1839, the Cambridge undergraduates as well as some churchmen founded the Cambridge Camden Society (Camden after the antiquary William Camden, 1551-1623).  One of the founders was John Mason Neale. The original Society evolved in 1846 into the Ecclesiological Society.

The object of the society was

the promotion of the study of ecclesiastical architecture and antiquities, and the restoration of medieval church remains … [They] reintroduced the medieval notion that every material object connected with a church edifice and its interior arrangement is infused with a vital symbolic meaning, the mastery of which held the key to the re-emergence of Catholic piety.[iii]

They started publishing a newsletter, The Ecclesiologist, in 1841, and, also in 1841, a short booklet, A Few Words to Church Builders.  This booklet outlined the most important points to which church architecture was supposed to adhere.  The author, probably Neale, made it clear that he was not speaking as an architect.  His “intention [was] to dwell on the Catholick [sic], than on the architectural, principles which ought to influence the building of a church.”  His demands were:[iv]

As seen in the list above, the chancel floor should be covered with encaustic tiles.  While tiles were used in earlier churches, they were very expensive and not necessarily up to the wear and tear. In the 1830s the Staffordshire company Minton’s began experimenting with encaustic (inlaid) tiles.  By 1840 they had developed the process to a degree where the tiles could be mass produced. As Moore[v] explains: “These tiles were made with a ‘plastic’ clay body, the shape of the pattern was impressed and the indented area was filled with a different coloured liquid clay slip.”  One of the earliest examples of Minton tiles (1844) is a decorated pavement at Osborne House, Queen Victoria’s residence on the Isle of Wight.  Many commissions executed for the Royal Family followed.  Pugin used Minton tiles in the flooring of the new Houses of Parliament. 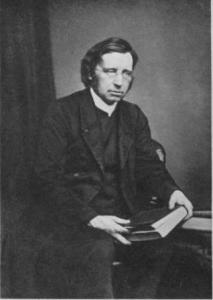 The Society declined in the 1860s and the last Ecclesiologist was published in 1868.  However, they claimed in their last issue that “we have the satisfaction of retiring from the field victors”.  And there is certainly some truth in this.  The new St Paul’s Ecclesiological Society was founded on 1 April 1879 as a “successor” to the original society. It dropped the prefix “St Paul’s” in 1936 and is now known as the Ecclesiological Society.  It is aimed at people “who find churches and their use a fascinating subject for recreation and study, and who enjoy, from time to time, meeting others of a similar turn of mind, making it ‘the Society for those who love churches’”.[vi]

I have to admit that I used to regard 19th century Gothic churches as fake medieval, just imitating a medieval design, without any meaning.  However, reading up on ecclesiology made me realise that this was just my ignorant arrogance.  Much more thought went into building these churches than mere imitation.

In my next post I will look at how the ecclesiological guidelines were realised in the building of the church of St John the Baptist in Buckland, making it one of the first ecclesiologically correct churches in Australia.

St John the Baptist, Buckland – a disagreement between gentlemen