The Blue Boar Inn in Leicester –

On his way to the battle of Bosworth, Richard III stayed in Leicester, leaving on 21 August.    According to tradition, he spent the night at the Blue Boar Inn[i], though Peter Hammond thinks it more likely that he stayed at the castle.[ii]  However, as this post is about the inn, it doesn’t really matter where Richard actually resided.

There is a legend that the Blue Boar was originally the White Boar (Richard’s personal badge), but that as soon as the landlord heard of Richard’s defeat, he quickly painted the boar in the sign blue.  A blue boar would have been completely PC under the new regime, as it was the badge of John de Vere, earl of Oxford, who was on Tudor’s side.  Whether there is any truth in this story is impossible to ascertain as the earliest evidence for the name is only from the 16th century, when it was the Blue Boar Inn.[iii]

Whatever its name at the time, the inn was on Leicester’s medieval High Street (now Highcross Street).  On part of the site is now a Travelodge.  It seems that though the quality of the accommodation might have changed – I can’t imagine a medieval king staying like the rest of us at a Travelodge – the purpose of the site has not changed. 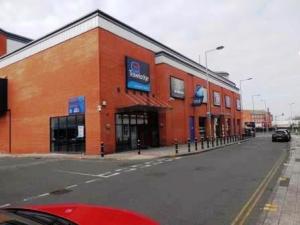 The medieval inn was relatively new in Richard’s day, built in the 15th century.  It would have been one of the luxury inns in the county, offering 5-star accommodation of the time, which is why it has been called the ‘Grand Hotel’ of its time.  The inn probably consisted of several wings surrounding a courtyard, with a hall, a kitchen, and stabling for horses.  Facing the street would have been the main building and a gateway to access the courtyard.  On the first floor, there would have been quite large rooms, which accommodated at least 4 people.  On the ground floor would have the hall, the restaurant of the inn.  Richard III would have slept in a chamber on the first floor with an oriel window with street views and a large gable.  There was a large fire-place, though this was probably less important at the time of Richard’s last visit in August.  The room was open to the rafters, with the timber decorated with painted scrollwork in black, red and yellow.[iv]

It has also been said that Richard did not like sleeping in strange beds and thus brought his own bed along.  Don’t we all sometimes feel like doing that?!  He is supposed to have left the bed at the inn and obviously didn’t have an opportunity to reclaim it.  The bed remained at the inn and many other visitors enjoyed a good night’s sleep in it.

There is a story that in the 17th century, a gold coin fell out of the bed when the landlady, a Mrs Clark, was making the bed.  She investigated and found that the bed had a double bottom with a layer of gold coins in between.  The Clarks became very wealthy but kept the source of their good fortune secret.  Then one day, an escaped criminal, Thomas Harrison, happened to stay at the inn.  He tried to chat up a servant, Alice Grimbold, who told him about her employers’ stash of money.  The criminal returned later with a mate to steal the money.  Mrs Clark was murdered in the process of the robbery.  Although the criminals at first got away, they were soon captured.  Harrison was executed, along with the servant, who the court found to have been an accomplice.

The bed remained at the inn and became a tourist attraction.  Visitors could view it for a fee of 1 penny.  It was later purchased by the Herrick family and kept at Beaumanor Hall.  Eventually, it came into the possession of the Leicestershire Museums Service and can be seen at Donington le Heath Manor House.  However, the superstructure of this bed is of a later date (16th-18th century), but the oak base could be medieval.[v]

The medieval building fell into disrepair and was demolished in March 1836.  Up to now the only information on what it looked like consisted of two engravings, which had been made by John Flower, an artist from Leicestershire, 10 years before it was knocked down.

This was until Richard Buckley, who was also the lead archaeologist of the dig which uncovered Richard III’s remains, happened to look through the notebooks of a 19th-century architect, Henry Goddard.  In one of them, he discovered notes and measurements of a large timber frame building – the Blue Boar Inn.  The notes showed exactly how the building was put together with all the details like the timber framing, the joints, pegholes, together with exact measurements.

He approached an architect, Steffan Davies, who has experience with historic building drawings, and asked him whether he could make computer-aided design drawings based on these notes.  Steffan put together a series of drawings and a 3D computer model.  This information was then fed into a 3D printer at the University, and converted into a 1:50 scale model.  The model is so detailed that it shows all the timber framing, the jointing, the moulding of the timbers, the fireplaces and even the first-floor chamber in which Richard III was said to have slept.

There is a short video on YouTube showing all the information, Flower’s drawing, the notebooks and eventually the 3D printout.  Don’t miss this, it’s fascinating.

[i]   Unless otherwise stated, the information for this post is derived from: ‘Reconstructing the site of Richard III’s last ‘resting place’ before Bosworth’, University of Leicester (18 Dec 2012).  URL:  http://www2.le.ac.uk/offices/press/press-releases/2012/december/reconstructing-the-site-of-richard-iii2019s-last-2018resting-place2019-before-bosworth [last accessed 26 Aug. 2017]

3 thoughts on “The Blue Boar Inn in Leicester”