This is the first of three parts dealing with Berkhamsted in Hertfordshire. The posts are based on a talk I gave at the recent Ricardian convention at Albury, where members of the Richard III Society from Australia and New Zealand met. 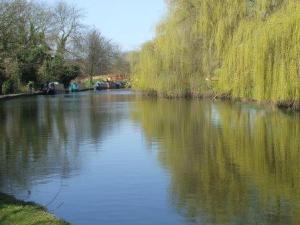 A few years ago, while visiting the UK, I decided to go to Berkhamsted in Hertfordshire, where the mother of Richard III, Cecily Neville, duchess of York, had resided for a long period.

It took the distance from Australia to put things into perspective.  So, when, many years later, I was going to drive from St Albans to Oxford, it was the perfect opportunity to make up for my earlier negligence.  In anticipation of my trip, I told some friends that I would be going to meet up with Cecily Neville for a coffee. 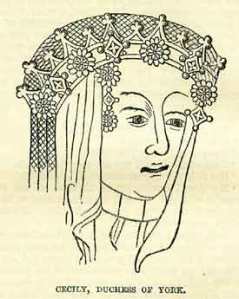 The name Berkhamsted is of Old English origin, Beorhðanstædæ.  The ending ‘-hamsted’ is straight-forward and translates to ‘homestead’ in Modern English.  However, it gets more tricky with the beginning ‘berk-’.  There are two explanations from which word this might be derived.  German speakers have a bit of an advantage when it comes to understanding Old English.  Many Old English words have equivalents in modern German.  As do both the words that may have been responsible for “berk-“.

It could refer to birch trees, Old English berc or beorc, as in the German word Birke, making it the ‘birch-grown homestead’.[i]  The second explanation goes back to the Old English beorg, with its modern German equivalent Berg, which would give us a ‘homestead among the hills’[ii].  Both birch trees and hills can be found in the area, making either explanation equally feasible.  The first documented use of this name is in a will of the year 970.

Berkhamsted developed along what used to be the Roman Akeman Street, in the marshy area of the Bulbourne River (and nowadays the Grand Union Canal).  The Akeman Street connected two Roman capitals, Verulamium (modern-day St Albans) and Corinium (Cirencester).  It might very well have been an older track, which was then developed into a road by the Romans.[iii]

This old linear structure of the town survives to this day.   In the wider area, the modern A41 follows the same course as the Roman road did.  These days, A41 bypasses the town, but that is just a fairly recent innovation.  If you follow the High Street, you can easily recognise the original route.

Incidentally, this is also the road I took on my travels.  From St Albans I drove to Hemel Hempstead, mastered the “Magic Roundabout” (I admit, this had given me sleepless nights in anticipation) and then on the A 41 until I came to the turnoff for the town centre.

Though neolithic finds and remains of Roman settlements have been discovered in the area, the town, the “homestead” of its name, seems to have only developed in the late Saxon period. This is supported by archaeological finds from that time.

After the conquest, the centre of the town shifted from Northchurch to the present centre of town.  We know from the Domesday records that there were two late Saxon watermills, probably on the sites of the Upper and Lower Mills.

Berkhamsted made its way into the history books after the Battle of Hastings.  Harold had been killed in the battle and Edgar Atheling[iv] was proclaimed king but was never crowned. It was at Berkhamsted that he, together with several bishops and earls, surrendered to William of Normandy in early December 1066.  This opened the way for William to be crowned at Westminster Abbey on Christmas Day of 1066. There is some discussion, whether this event took place at Berkhamsted, the town, or at Little Berkhamsted, the village, but most experts agree that it was the town.

Berkhamsted’s status as a town was recognised in 1156 by Henry II by a royal charter.  This charter confirmed the rights and privileges of the men and merchants of Berkhamsted, which they had enjoyed during previous reigns, going back as far as Edward the Confessor.  This gives a good indication that the borough and the market predate the conquest of 1066.  These rights and privileges included that the merchants of the town did not need to pay tolls and taxes anywhere in England, Normandy, Aquitaine and Anjou.

Its recognition by Henry II gave rise to the town’s prosperity.  It developed into an important, though probably undefended trading centre along this important route in the 12th and 13th century.

The local economy benefited.  Documents from the 13th century show a wide variety of trades, including carpenters, butchers, brewers, tailors, a goldsmith and a weaver and even a banker.  There was a forge in town.  The most important trade was the wool trade.

Berkhamsted had a triangular market place and the property layout of a typical medieval market town.  This layout of Berkhamsted goes back to the early 13th century.   This was due to its increased wealth and status, but the main influence was the initiative by Geoffrey Fitz Piers to reflect this.

Geoffrey Fitz Piers (aka Fitz Peters)[v] came from Wiltshire, where his family were local royal officials and minor landholders.  He made his career in the royal judicial service and the exchequer.  He married Beatrice de Say, coheir to the very rich Mandeville barony, which he claimed in the right of his wife.  In 1198, he became justiciar, which means he would act as regent when the king was abroad and otherwise took charge of matters in the king’s place.[vi]  Geoffrey seems to have been a loyal royal servant, who could have been dismissed at any time, who kept his position until his death.

He was granted the farm of the honour of Berkhamsted in May 1205, which he held until his death in 1213.  It is during this time that the building of St Peter’s Church was begun, which has been attributed to him.  Geoffrey also founded two hospitals in Berkhamsted, dedicated to St John the Baptist and to St John the Evangelist (see below).  Both had been given to the Hospital of St Thomas of Acre in London. The hospital dedicated to St John the Baptist built on the site of the church of St James, with the old church being integrated as the chapel of the hospital.  The exact location of the other hospital is not known.

St Peter’s was built in a prominent position at the eastern end of the triangular market place.  Thus, it became a symbol of civic pride of a town becoming rich by the wool trade.  Another of his changes might have been the creation of Castle Street, which meets the High Street/market place at the church and became the main access route to the castle.

Later, Edward IV granted the town another Royal Charter, which prohibited that any other market town was to be set up within eleven miles.  This must have acknowledged and protected the role Berkhamsted played in the area.

[i] This is the explanation given by Gover, J.E.B., A.Mawer & F.M. Stenton, The Place Names of Hertfordshire. English Place-Name Society, Vol.XV. Cambridge University Press, 1938, pp.27-28

References (for all three parts):

Doggett, N., ‘The influence of the Dissolution on Hertfordshire’s towns in the sixteenth century’, in:  A County of Small Towns:  The development of Hertfordshire’s urban landscape to 1800, ed. by Terry Slater & Nigel Goose.  University of Hertfordshire Press, 2008, pp.333-361 (Berkhamsted School pp.335-336)

Part III:  A look around town