On 12 June 1215, the English king John agreed – not completely voluntarily – to the wishes of the barons and sealed the Charter of Liberties, which later became known as the Magna Carta. The 800th anniversary this year is marked by a wide variety of events in the UK and around the world, at least in those countries influenced by English law.[1]

Here in Sydney, a Magna Carta Symposium was held on 7 May at the State Library under the title ‘History’s Most Important Document’, organised by the History Council of NSW, the Magna Carta Committee of the Rule of Law Institute of Australia and the State Library of NSW. Five eminent speakers talked about the Magna Carta and its importance for Australia. The provision of morning tea and a buffet lunch was unexpected in a free event and greatly appreciated.

During the day, two copies of the Magna Carta were on display. The one was a handwritten reproduction on vellum of the 1215 Magna Carta held by Salisbury Cathedral, displayed by the Magna Carta Committee. A poster of this was made available to each member of the audience at the end of the day.

The other was a small manuscript book containing the 1297 version of the Magna Carta and 20 other statutes, which was bound ca. 1330, which is held at the State Library of NSW.  The book is only approx. 10 cm long in its original bindings and also written on vellum. 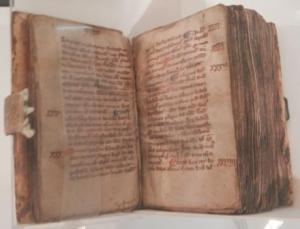 Dr Alex Byrne of the State Library of NSW and Emeritus Professor David Carment, President of the History Council of NSW, who was the Master of Ceremonies, welcomed the audience to this fully booked symposium.

Professor Nick Cowdery started the day with a look back at the history of Magna Carta – 800 Years Young and its continuing importance. Much of what we take for granted in a democracy today, like the rule of law, the separation of powers, the presumption of innocence and much more, is based on the principles expressed in this 800 year-young document. It was interesting to learn that the “Magna” has nothing to do with the greatness of the charter, but only refers to its comparative size. When the Charter of Liberties, which the Pope had annulled and King John cancelled, was reissued in 1225 by Henry III, at the same time a Forest Charter was issued, which happened to be smaller, so the charter dealing with rights and liberties was the “large charter”  or Magna Carta .[2] Both charters belong together and the small book displayed by the State Library contains both of them.

Then Emeritus Professor John Hirst spoke about British Rights and Liberties in Australia and explained how politicians have appealed to the Magna Carta all through the history of Australia.

Australia has one of the 23 or 24 “original copies” made in 1297, when the charter was confirmed by Edward I and copies were sent to all the counties. Dr Rosemary Laing, Clerk of the Senate, spoke about Australia’s Magna Carta and told us how this copy came to be on display in (New) Parliament House in Canberra today, a path that was not always straightforward nor without arguments. This is one of only two copies held outside of the UK, the other being in the US.

Australia’s copy is the one sent in 1297 to the sheriff of Surrey, Robert de Glamorgan, to be proclaimed in his county court. Later this copy had been in the possession of the King’s School in Bruton, Somerset. They were at one stage short of money and decided to sell it. They first offered it to the British Library, who did not realise its potential value, though they hold the Surrey issue of the Forest Charter. The school then sold it via auction and it was in 1952 purchased for 12 500 pounds sterling by the Australian Government (the price was the equivalent of a large home and garden in the best residential areas of Sydney, so while fairly high not unaffordable).

Magna Carta has often been put to use in Australia, as Professor David Clark explained in his talk Magna Carta in Australia 1803 – 2015: The Power of a Myth and an Idea. As the title indicates, in many cases the argument was more based on a myth rather than the actual text.

Dr Andrew Tink considered Magna Carta’s roundabout relevance to early NSW and especially to Sydney. The city was named by the first British settlers in honour of the then Home Secretary Thomas Townshend, lord Sydney, who had been instrumental in sending the First Fleet to the other side of the world. Thomas Townshend had not inherited his title, but was made a peer in 1783 in recognition of his role in settling the peace between Britain and America. He was a descendant of Algernon Sidney, who had been the last to seriously invoke the Magna Carta against a monarch, Charles II, in his case. He had been executed for treason in 1683. Tommy Townshend was very proud of his great-great-uncle, so when he was offered a peerage a hundred years later, he chose his ancestor’s name for his title, but changed the “I” for a “Y” to avoid upsetting any Sidney descendants.

Incidentally, lord Sydney was also involved in an early case of lost luggage. A Mrs Cable was to be transported to Australia, but the captain of the convict ship refused to take her infant son as well. Someone asked lord Sydney for help, who obliged and not only allowed the son and his father, Mr Cable, to accompany Mrs Cable, but also gave them a parcel of school books and clothes. These went on the Alexander, while the family travelled on a different ship. When the parcel arrived, it was found that the books were there, but the clothes were missing. The Cables took the captain of the Alexander to court and won their case in 1788, the first year of European settlement in Australia. This is the first civil action brought in Australian legal history and commentators argue that this shows that the colony began with the rule of law. [3]

Clearly nothing much has changed since then, and thieves are still not interested in books. A few years ago I travelled to Namibia, but my luggage only arrived three days after me.  I had various presents for family and friends in my bag, and the only one still there was a book while all the other gifts, like a scarf and beach towel, had vanished. Incidentally the book was People of the Book by Geraldine Brooks, which tells the story of the survival of a book against all the odds.

The afternoon closed with a panel discussion. All the speakers expressed their concern that the teaching of the political and legal history of Australia was neglected in schools. From what I hear from my daughter this seems to be a very valid point.

This was a truly informative and inspiring day and would like to thank all involved for making it such a memorable experience.

[1] More about the History of the Magna Carta at http://magnacarta800th.com/history-of-the-magna-carta/ [last accessed 9 May 2015].

[2] An illustrated post about the Forest Charter is on the Medieval Manuscrpits Blog of the British Library at http://britishlibrary.typepad.co.uk/digitisedmanuscripts/2015/05/magna-carta-and-the-kings-forests.html [last accessed 10 May 2015].

[3] The court papers can be read online at http://www.law.mq.edu.au/research/colonial_case_law/nsw/cases/case_index/1788/cable_v_sinclair/ [last accessed 10 May 2015].

One thought on “Magna Carta Symposium in Sydney”