This fourth and last part of the series about God’s House in Ewelme will look at the domestic buildings and the school.

At the western end of St Mary’s church is an impressive wooden door.  This leads down some steps to a covered passage connecting the church and the almshouse quadrangle.   In each of the external walls of the passage there is an archway, opposite of each other.  Originally, they probably had wooden doors, which could be opened on feast days to allow processions to walk around the church.  Normally they would be kept closed to allow the almsmen to get to church without getting wet and being blown away by the wind.  The passage is built in brick with stone details and can be linked architecturally to the later building period of the church. 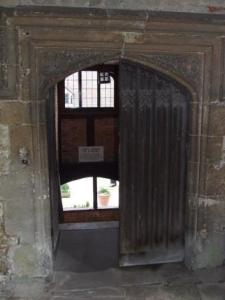 Passage to the alsmhouse from the church

END_OF_DOCUMENT_TOKEN_TO_BE_REPLACED

Parts III and IV of this series about William and Alice de la Pole’s foundation at Ewelme will deal with the buildings of God’s House.  Most of these still stand and provide a glimpse into a long gone-by time.  This post deals with St Mary’s Church, which still serves as Ewelme’s parish church. END_OF_DOCUMENT_TOKEN_TO_BE_REPLACED

The second part of this series of blogs is dealing with life of the community in the almshouse.  Most of the information on this can be deducted from the Statutes, which have survived. END_OF_DOCUMENT_TOKEN_TO_BE_REPLACED

A few years ago, I had the opportunity to visit Ewelme and its St Mary’s Church with the adjacent almshouse and school.  This was an experience which has resonated with me since that day.  It was an opportunity to come close to “normal” medieval people, not just the high-status people.

Ewelme is a village approx. 25 km south east of Oxford.  Its name is derived from the Anglo-Saxon “æwelme”, meaning a fresh spring, which refers to the stream which still runs through the village.