A Builder of St Albans Cathedral:

Since first publishing this post, valuable information mainly about one of the properties given to Robert the Mason has been brought to my attantion by Victor, a friend of a friend of mine.  I am most grateful for his contribution and have revised my original post on 22 July 2015.

Ever since visiting St Albans for the first time 35 years ago, on the August Bank Holiday Monday in 1980, I have been very fond of and interested in the city and its cathedral. It was a special treat to read about its first architect, Robert the Mason.

What is now St Albans Cathedral was the church of an abbey, which had originally been founded by King Offa in 793. After the Norman Conquest of 1066, the last Saxon abbot of St Albans, Frederic (or Fritheric), got into trouble with the new regime, and chose to flee to Ely, where he died shortly afterwards. [1] Lanfranc, archbishop of Canterbury, then installed his relative, Paul de Caen, as the first Norman abbot in 1077.

Abbot Paul thought that the Saxon buildings were terribly old-fashioned and needed replacing. Immediately after taking over, he set about building a new monastery. During his time the church and all the other buildings except the bake-house and the buttery were supposedly finished, [2] though this seems unlikely, considering the tremendous scope of work.

Paul often gets all the credit for the Norman church, as he was undoubtedly the driving force behind it. However, without the people who actually built the church, this might just have remained a dream. He was lucky that he found an excellent builder for his church: Robert the Mason.

A large part of what today is St Albans Cathedral, the former abbey church, is the Norman building built by Robert, one of the earliest buildings in England which still stands today, nearly 1000 years later. Robert’s work can be seen in the transepts, the eastern part of the nave, the great tower and the presbytery. In her book on St Albans Abbey, Eileen Roberts dedicates two entire chapters to this remarkable man’s achievements. [3]

It seems probable that Robert was of Norman origin, as the name, at least in this form, was primarily introduced into England by the Normans. [4] His workforce would probably have been composed largely of local men of Saxon origin. They would have been employed in considerable numbers, for abbot Paul envisaged a large church, significantly larger than Canterbury Cathedral, which Lanfranc had begun seven years earlier. 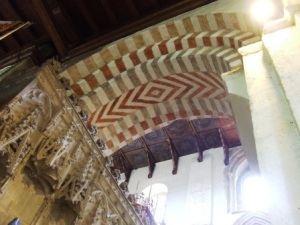 For much of the building Robert reused Roman material from the old town of Verulamium, a bit to the southwest of the abbey and the medieval town (the present city centre). Apparently, at that time, much of the Roman town was still standing, giving an abundant supply of bricks and flint. It was this abundance, on which the design of the church is based, and not the other way round, that material was sought to fit the design. [5] The Norman Robert would have been used to different materials, but he mastered the techniques applied by the Romans quickly.

While we might regret today that not more of the Roman town is left, Robert’s reuse of older building materials is by no means unique. The Moors built the Alcazaba in Malaga with stones from the Roman theatre next door, and after the dissolution of the monasteries in England, their building material also found new uses.

He not only re-used Roman material, but also bits of the Saxon church. The south transept triforium includes six Saxon baluster shafts, the north transept two. Maybe Robert did not share his employer’s contempt of all things Saxon completely.

The church stands on a hilltop site. Its location was determined by the alignment of existing roads to the north and east. The orientation of the church is not strictly to the east, but rather more to the south-east. This outcome was probably dictated by the shape of the available site, and also by the need for the church to be sited on the best possible spot for its foundations.

The heavy tower was placed where the bedrock is fairly close to the surface and therefore only limited foundations would be needed. Otherwise the hilltop, where the church stands, was terraced and then levelling courses of Roman bricks and flint installed. Another innovation was the use of an exceptionally strong mortar made from lime, gravel and pulverised bricks.

We must remember that this church was built without any of the technological means we take for granted today. As Eileen Roberts says “methods were by rule of thumb”. Robert’s thumb must have worked very well indeed, as St Albans Cathedral is the “only major church in England with a great crossing tower of the eleventh century still standing”. [6]

Unfortunately, abbot Paul did not live to see the consecration of his church. He died on 11 November 1093, [7] and the church was only consecrated during the time in office of his successor, Richard d’Albini (d’Aubigny), on 28 December 1115.

Who was Robert the Mason?

Since much of the Norman church is still standing, Robert’s techniques are fairly easy to establish. However, it is much more difficult to find out something about Robert’s life. Obviously, he was not a member of the nobility and facts about common people, especially from such a long time ago are much harder to come by. However, for me, it is people like Robert that make history come alive and that I can relate to.

The Gesta abbatum monasterii Sancti Albani, written by Thomas Walsingham (ca. 1340–c.1422) and Matthew Paris (ca. 1200-1259), is a very valuable source of details about Robert’s life. It states that for his services, Abbot Paul granted him and his heirs a house in St Albans as well as lands. [8]  The mention of heirs might indicate that he was married with children, though this was very much a standard format, indicating it was not an agreement limited to his lifetime. If indeed he was married, we have no details as to the identity of his wife or children.

Nor do we know where Robert’s house was. St Albans was, compared with other towns at the time, rather small. In 1086, the Domesday Book records ca. 500 inhabitants in 91 households. [9]

Eileen Roberts refers to an article by Christopher Saunders, reporting on archaeological excavations in what is now Chequer Street, which in the middle ages was part of St Peter’s Street. She quotes that “an elaborate Romanesque door jamb decorated at the top with a carving of a human head” was discovered, which suggested that at this site “an eleventh/twelfth century stone house may have stood”. Could this have been Robert’s house? [10] Behind some of the present day houses in Chequer Street, footings of flint and Roman tiles were discovered. We do not know what type of houses they were, but it is thought that they date from the twelfth or even thirteenth or fourteenth century. [11] Nonetheless, this sounds very much like the same type of material which was used in the construction of the Norman abbey church.

The Gesta abbatum says that the lands granted to Robert were in “Syreth” and in “Wanthone”. “Syreth” is present day Sarratt, to the west of St Albans near the border to Buckinghamshire. King Offa had originally given the manor of Sarratt to St Albans Abbey. The income from this land was 60 shillings per year.

Whilst the present name of “Syreth” was easy to establish, the present-day identity of ‘Wanthone’ is more problematic to identify. There is no other mention of Wanthone in either the Gesta or the Domesday Book. It could be that this land was only part of an estate with a different name, which was in the ownership of St Albans monastery by 1093. That is the year Abbot Paul, who is recorded as giving it to Robert, died. It has been suggested [12] that the “th” in the name might be a misreading of what was actually a “d” in the name by the Saxon character ‘ð’ (small letter eth = th) when the Latin document was written. If this hypothesis is correct, “Wanthone” could be replaced with something like “Wandone”. In The Place-Names of Hertfordshire [13] there is Wandon End and Wandongreen listed under ‘King’s and St Paul’s Walden’ in the Hitchin Half-hundred. As the name indicates, King’s Walden was held by the king in 1086 according to the Domesday Book. However, St Paul’s Walden had been in the possession of the abbot of St Albans since 888. If Robert’s Wandon was included in St Paul’s Walden, Abbot Paul could have given it to Robert the Mason. Indeed, both Wandon End and Wandongreen are shown to be in the possession of St Albans abbey in ca.1250 in the Cartulary of St Albans Abbey (Cotton MS Jul. D. iii).

Abbot Paul’s successor, Richard d’Albini (d’Aubigny), was apparently equally impressed with Robert’s work, for he granted him land at Sopwell with an annual income of eight shillings. [14] Although Sopwell is now part of St Albans, in Robert’s time it would have been situated well outside the town.

In his later years, Robert was also of service to the abbey as a witness to various deeds, the first one in 1122, the last ca.1135. [15] By then he must have been quite old, for he took up his job as mason nearly 60 years earlier.

Although the lands had been granted to him and his heirs, he resigned the land in Sarratt to Hamelinus, prior of St Albans, during his final illness, because there had been so much ‘murmuring’ among the monks. [16]. However, the complaining monks do not seem to have bothered him too much for the 40 years or so that he enjoyed the income provided by his property at Sarratt. There is no mention of the other lands he had received.

In about 1140, possibly soon after Robert’s death, Geoffrey de Gorham, founded the nunnery of St Mary of Sopwell, presumably to accommodate the nuns who had previously dwelt at St Albans Abbey. [17]

Robert continued to be held in high esteem long after his death. In the 13th century, Matthew Paris calls him the man “who excelled all builders of his time”. That his parts of the church still stand after 1000 years is certainly a testament to his excellence as an architect. This is in contrast to one of his successors, Hugh de Goldcliffe, who approx. 100 years after Robert was master mason working on the west front. He was dismissed without pay, because his work, though visually beautiful, collapsed. [18]

The next time I get a chance to visit St Albans, I will go and pay my respects to the work of Robert the Mason, “who excelled all builders of his time”.

One thought on “A Builder of St Albans Cathedral”