In this final part of Hatfield before Hatfield House, we look at the last medieval manor at Hatfield, and the only one of which a part is still standing.[i]

In 1478, a new bishop of Ely was appointed:  John Morton. Morton was a dedicated supporter of the Lancastrians and would be on very good terms with Henry VII, though considerably less so with Richard III.  However, he is not only remembered for political mischief, but also as one of the great builders of his age.  Soon after being elevated to the bishopric of Ely, he set about rebuilding the manor at Hatfield, as well as Wisbech Castle, which also belonged to the Diocese of Ely.  Another project was a great dyke, which was cut through the fens from Peterborough to Wisbech, and is considered a pioneer effort in drainage.  In 1486, a grateful Henry VII had him translated to the see of Canterbury, where he completed the Angel steeple on the cathedral and further buildings of the archdiocese, as for example the gatehouse of Lambeth Palace (also built of brick).[ii] 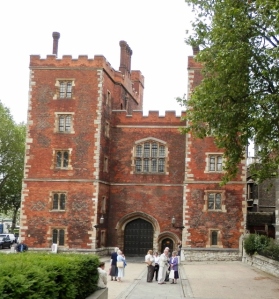 While nothing remains of the pre-15th century manor at Hatfield, a wing of Morton’s redevelopment still stands, the ‘Old Palace’. A plan exists, showing the palace in the 17th century, shortly before most of it was demolished (a copy is included in the British History Online entry on Bishops Hatfield).  This plan

shows an imposing building of quadrangular form, with stair towers in the internal angles of the central court and a principal entrance in the centre of the outer eastern face. The great hall, solar, kitchen and butteries were in the west wing, now surviving. The state apartments were probably in the south wing. It was a building not only of some size, but also of considerable elaborateness, for Morton was a great builder.[iii]

The plan was drawn up just before three of the wings of the old palace were knocked down to make room for the new Hatfield House.  Therefore, it was most likely a reflection of the palace as it was in the early 17th century, including anything added or altered after the late 15th century.  It has even been suggested that at least some of the additions had just been planned, but never actually existed. Whether the plan reflects the actual 17th century palace or not, it is highly unlikely that it reflects the original 15th century palace.

However, what remains today is from the original 15th century palace.  This was the western wing, with the great hall and its impressive timber roof.  In the south end of the hall, at what used to be the dais end, there was a tall bay window, which is now blocked.

It has been suggested that one of the architects of the 15th century palace was a young John Wastell.  Wastell, a mason, would go on to work at King’s College Chapel and Great St Mary’s, both in Cambridge, and St James at Bury St Edmund’s (the church became the cathedral in 1914).  After being promoted to the see of Canterbury, Morton employed Wastell to build the top part of the great central tower at Canterbury Cathedral (Angel steeple) from 1494 to 1497.  In documents predating the tower, Wastell is described as Morton’s mason, so it seems likely that Morton had used him in that capacity before.  It is therefore possible that Wastell was involved in building the ‘Old Palace” for Morton.[iv]

The complete palace was built of bricks.  Brickwork had been introduced relatively late into eastern England from northern Europe. It was only towards the end of the middle ages or even in the Tudor period that bricks were used widely, though still only affordable to the very wealthy.  Along with bishops William Waynflete, Thomas Rotherham and John Alcock, Morton is regarded as one of the late 15th century builder-bishops of south eastern England, all of whom used bricks in many of their buildings.[v]

To the west of this western wing, at the end of Fore Street towards the old town, there is a gatehouse range, also dating from the 15th century, which is in a similar style to the palace, though less elaborate.   Most of the windows are original.  It is assumed that this was the original main entrance to the palace grounds, even though the 17th century plan shows the main entrance of the complex to the east.  The eastern entrance was probably a later addition.

After the dissolution of the monasteries, Hatfield became a royal property and very much the home of princess Elizabeth.  Although during the reign of her sister Mary, she lived there under a kind of house arrest.[vi]  According to legend, she was sitting under an oak tree in the park, when she learnt that Mary had died and she would be queen.  The original tree has not survived, but it was replaced in 1985.

In the beginning of the 17th century the new Hatfield House was built.  However, whatever some publications might suggest, Hatfield had an interesting and extensive medieval history, which should not be overlooked.  It did not start with Robert Cecil’s palace!

Part 1: the Anglo-Saxons and Ely

Part 2: the Park and Township at Hatfield

Part 3: the Medieval House of the Bishops of Ely