On 4 December 1154, a new pope was elected, following the death of pope Anastasius IV.  The choice fell on Nicholas Breakspear, so far he has been the only pope from Britain.  He assumed the name Adrian IV.

Breakspear was probably born in Abbots Langley near St Albans in Hertfordshire, possibly around 1100. His father Richard seems to have been a married priest, who later became a monk at St Albans Abbey, where he is also buried.  Though Richard’s decision to become a monk may seem admirable, one source says that he left his family in poverty to become a monk, which, if true, is less admirable.

Many of what is said about the young Breakspear come from Matthew Paris, though he sometimes did not let the truth stand in the way of a good story.  This might also be the case with the following story.  According to Paris, in around 1115 (the year the buildings by Robert the Mason were consecrated), the young Nicholas also wanted to become a monk at St Albans, but the abbot advised him “Have patience, my son, and stay at school yet a while till you are better fitted for the position you desire”.  Based on the reference of him going to school, it has been suggested that he attended the grammar school in St Albans.

Nicholas then studied in France, probably in Arles.  Arles was a famous centre for studying law and later as pope, Nicholas displayed his legal training.  It is not known how he could afford his studies, he may have had a wealthy benefactor back home in Hertfordshire.  He later became a canon of St Ruf near Avignon, where he was made abbot about 1140. He came to the attention of Pope Eugenius III, who sent him to various trouble spots.  The monks of St Ruf were less impressed with him and complained to the pope repeatedly.  Eventually, Eugenius allowed them to elect another abbot, while creating Breakspear cardinal bishop of Albano (in 1149) and sending him on a mission to reorganise the church in Scandinavia. Breakspear sorted out a major crisis about who should be king of Norway, and returned to Rome just in time for the papal election after the death of Eugenius’ successor,  Anastasius IV on 3 December 1154 (he had only been in office for 17 months).

As pope Adrian IV, he and emperor Friedrich Barbarossa fought over supremacy.  Friedrich wanted to be crowned in Rome by the pope, as Charlemagne had been in the year 800.  After some diplomatic wrangling, Adrian eventually crowned Friedrich on 18 June 1155.

Adrian also clashed with William I “the Bad” of Sicily and the Byzantine emperor Manuel I Comnenus. He was on better terms with the king of his home country, Henry II.  In the bull Laudabiliter, he apparently gave Henry papal approval for the conquest of Ireland.  This is regarded as part of Adrian’s advancement of a centralized papacy.  He wanted to make his court the final court of Christendom to which others should appeal. 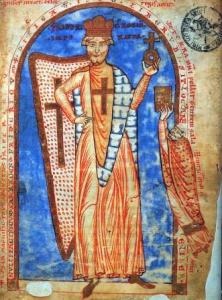 It has been suggested that he chose the name Adrian to remember the first pope of that name in the eighth century, who had endowed St Albans with special privileges.  Adrian IV followed that tradition and granted St Albans Abbey many privileges.  The abbey became independent and did not have to answer to a bishop.  Its abbot was allowed to wear a mitre and sandals, which was usually reserved for bishops and popes.  The privileges were confirmed by Adrian’s successor, Alexander III, which led to St Albans under abbot Robert de Gorham (1151-1167) to be recognised as the premier abbey of England at the Council of Tours in 1163. Adrian also confirmed the archbishop of York in his metropolitan authority over the Scottish bishops, and in his freedom from that of Canterbury.

He died at Anagni near Rome on 1 September 1159 and was buried in St Peter’s Cathedral, apparently wearing Turkish slippers, dark silk robes and an emerald ring.  He is remembered for reforms within the papacy and upholding church law against feudal law.  He was once asked to make a judgement whether the feudal lord had the right to dissolve the marriage of two serfs who had married without his approval. Adrian decided that the lord did not have that right.  He continued the reforms set in motion by Pope Gregory VII one century earlier ensuring the independence and authority of the church and decreasing the influence of secular rulers on church affairs.