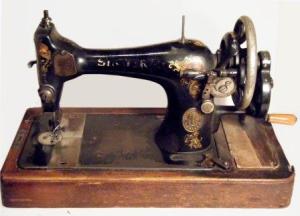 I just finished reading The Sewing Machine, a delightful debut by Valerie Fergie.  The central “character” is a Singer sewing machine which connects four generations of two families over a period of more than 100 years.  The earliest is Jean, who works at the Singer factory in Clydebank in 1911.  The last is Fred, who inherits the machine in 2016.  Initially, he wants to get rid of it, but then starts growing attached to it.

Apart from the early chapters in Clydebank, most of the action takes place in Edinburgh.   I am sure that readers who know that city well, will find many familiar places.  However, it won’t diminish your enjoyment, if, like me, you don’t.

Each chapter focusses on one of the characters, in part through notebook entries and blog posts by the present-day Fred.  The chapters are not arranged in a chronological order, but rather fit together by certain aspects of the storyline.

The characters are well developed and, above all, very likeable.   The love and commitment, between husbands and wives, parents and children, comes across to the reader.   Of course, there are also several less likeable characters, but these – though creating problems for some of the protagonists –  are more secondary to the story.  The majority of the characters face some sort of insecurity in their lives, where the sewing machine is the tool to overcome this.

The novel could be compared to a jigsaw puzzle, with more and more pieces fitting into the developing picture until in the end the whole story is revealed.  I couldn’t wait to find out whether my idea how a certain piece of information would fit was correct.  The way it all comes together, in the end, is brilliant.  I was hooked from the beginning and found it hard to put the book down.  Finishing the book was sad, like saying goodbye to good friends.

The book is well researched.  Natalie Fergie clearly knows about sewing machines and textiles, but also introduces the reader to other issues like the strike at the Singer factory in 1911, when 11.000 workers put down their tools, or the working conditions of nurses at different times.

The sewing machine in the story reminded me of the machine in my grandmother’s home.  I was 13 when she died and at that stage not at all interested in any kind of needlework, so my memories are somewhat vague.  While the machine in the novel is a hand crank model, I think my grandmother’s might have been treadle one.  I have often thought that I would have liked to give it a good home, even if only for decoration, but alas it’s long gone.  I can fully understand Fred’s reaction to the machine he inherits.

I loved this book and hope that there are many more novels to look forward to by this author.